The Aztek Siren 3 deck is big - really big. It features a boast of improvements over its predecessors, including a lighter and more responsive deck plate, a flat grinding surface on the front dropouts, and a stronger headtube. The Siren 3 deck comes with 24mm and 30mm spacers so you can rider any wheel up to 120mm, making this one of the more versatile decks on the market. With an 84 degree headtube angle, the rider has maximum footspace, giving plenty of room for street or park tricks.

The Siren 3 deck is 5.5" or 6" wide by 22" or 23" long, with an 84 degree headtube angle. Headtube angle affects a couple of things. The steep rake of the Siren 3 street deck makes it perfect for those riders who have mastered the single tail whip and are moving onto multiple whips. The steeper the headtube angle, the more the deck whips around a flat plane with less resistance. Because the deck has boxed ends, we consider the Siren 3 street deck to be a street deck but it's equally at home at the skatepark or in your hood. Scooter decks that are 23+" long will be ideal for intermediate to pro riders that have been in the sport for a while or for those scooter riders that need a little more footspace. The Siren 3 street deck works with the following wheel diameters: 100mm,110mm,115mm,120mm and the following wheel widths: 24mm,26mm,28mm,30mm. Note that decks typically come standard with 24mm and 30mm spacers. If you change the wheel core width, you will also need to change your spacers to accomodate the new wheel core width. 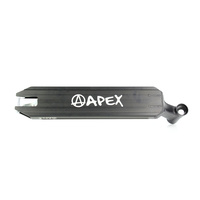 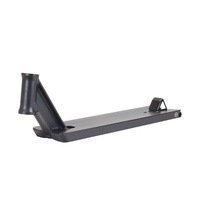